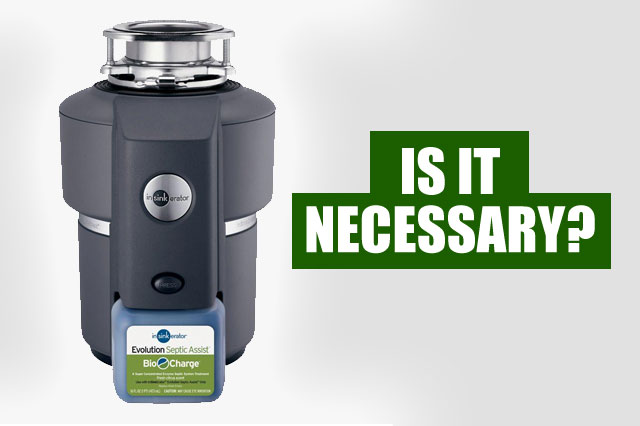 A garbage disposal is a device in a kitchen sink that grinds up food waste to increase its flow. The machine is often used as an alternative to the actual garbage cans. The proper use of garbage disposals takes care of a good deal of food waste you produce in the kitchen while cooking.

Is a garbage disposal necessary?

The installation of garbage disposals as with many other garbage units depends on the circumstances of your house. If you are the type of person who is lazy to even reach out to a garbage can, a garbage disposal is necessary for you. The question of whether you need a garbage disposal or not is mainly a comparison of its pros and cons.

If you evaluate these factors and find out that its advantages highly favor you while the demerits are not a big deal to you, then the garbage disposal is necessary for you. If you feel that the cons are a bit overwhelming, there is nothing wrong if you avoid the unit and look for alternatives.

What are the advantages and disadvantages of a garbage disposal?

With a garbage disposal installed in a kitchen sink, you do not have to stack up food waste until it is collected. To add to the convenience, the device offers a method of handling kitchen waste with just a flush of running water. The method also adds to the cleanliness of the kitchen sink.

Save on space used to compost food waste

Many people nowadays purchase modern homes. In these modern homes, there is barely a space that you can use to dispose of your food waste. The garbage disposals grind even relatively big food chunks to smaller pieces that can be flushed into a lesser space. Due to this reason, if you buy a prebuilt modern home, it will in most cases, have garbage disposals installed in your kitchen sinks.

Reduce the cost of waste management

Garbage disposals eliminate the cost incurred in the collection, transportation, and incineration of household waste. If you are not ready to recurrently spend on your kitchen waste, you should secure a relatively small amount of money for the installation and maintenance of a garbage disposal.

If you choose alternative methods of waste management such as incineration, there will be the production of greenhouse gases such as carbon dioxide that may cause a detrimental effect on the environment. With the current high expectation of having a cleaner environment in many places in the world, this advantage of a garbage disposal may even outweigh a couple of its demerits.

The decomposition of food wastes produces a significant amount of methane gas. The gas has been highly exploited in the production of electricity to power some of the household processes and also as a source of heat energy in cooking. You can produce your methane using a biodigester. Water treatment plants in your local area may also produce methane for public use.

Although garbage disposal has numerous advantages, there exist some drawbacks in its use. Some of them include:

A garbage disposal is prone to clogging, especially if you dispose of highly fibrous products, peels, and greasy products. Although it is easier to fix a garbage disposal, the problem may occur several times, making the disposals expensive to use.

Clogged garbage disposals cause unpleasant in-sink odors that may eventually lead to a musty home. The problem can, however, be eliminated through proper maintenance, frequent cleaning, and deodorization of the equipment.

What is the point of a garbage disposal?

Many people use a garbage disposal to reduce the time they use in cleaning sinks and emptying garbage cans. It is, however, not in peopleâs mind of what other benefits garbage disposals can offer. Garbage disposals are however made for people who are ready to maintain it or for those who at least have extra cash for frequent replacement.

How do you live without a garbage disposal?

Since it is not a must to install a garbage disposal, here are tips that will help you with your kitchen waste disposal:

You may still manage your waste by composting either in a designated space in your backyard or through a local municipal site. The good thing with kitchen waste is that it decomposes quickly.

Installing a sink strainer, properly cleaning it and avoiding stuffing your sink with massive food wastes are some of the practices you should embrace if you want to live without a garbage disposal. All these activities keep potential food waste that may clog up your sink piping at bay.

link to Should You Water Your Compost?

It is critical to keep the right amount of moisture in your compost as too little or too much moisture can affect the process. The process of composting can seem simple but you have to understand...