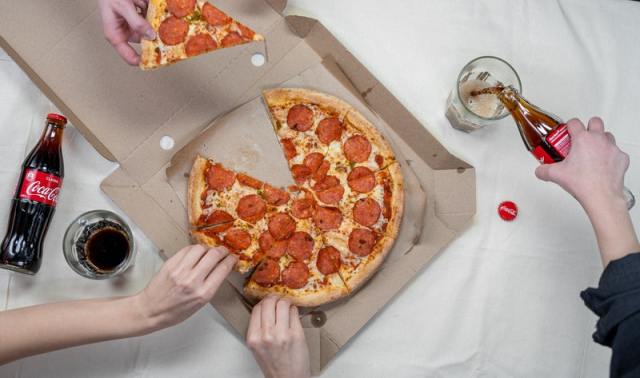 Most people know that paper and cardboards are recyclable. However, there is seemingly an arbitrary instruction not to put the pizza boxes in the recycling bin, which is often colored blue. So, are pizza boxes un-recyclable despite it being made from cardboard? That’s what we’ll explore in this article.

The primary reason pizza boxes are deemed non-recyclable is due to the cheese and grease sticking to it. These added elements not only discolor the boxes and make them look unsightly, but it can also hinder the recycling process in the mills. Some institutions prohibit putting pizza boxes in recycling bins like the University Of Kansas. However, that’s just one side of the story.

According to WestRock’s study, the grease and cheese found in most pizza boxes are not significant enough to impact the quality of the recycled papers and cardboards. While such an issue has a legitimate concern in the past, new technologies and methods changed everything. Nowadays, paper mills are a lot better at screening out the cheese and grease. Having said that, paper and cardboard recycling mills are not still not getting enough pizza boxes to make a significant impact.

It’s the reason why the AFPA published a new industry guideline, which is making pizza boxes recyclable. However, this is under the condition that the boxes are free from other elements such as stray pizza crust, pizza savers, sauce containers, or chicken wings.

For recycling advocates, this is a big development. If you think about it, the number of pizzas being served every day is in the millions. And, a good portion of that comes with pizza boxes. In other words, there’s a vast amount of resources that are waiting to be tapped.

Can You Recycle Frozen Pizza Boxes?

This is another common question. Nowadays, putting frozen pizza boxes in a blue lid shouldn’t be a problem just as long as your recycling center allows it. While most recycling mills are already adept enough in terms of separating the grease and cheese from the boxes during the pulping process, the local disposal service may haven’t yet been informed. Hence, it’s best that you consult with the local services if they allow pizza boxes in the blue lid. You don’t want to be fined or penalized for doing something you think is right.

Not only the answer is a yes, but composting is even better than putting the pizza box in the recycling bin.

To compost your pizza boxes, you’d want to start tearing it down into smaller pieces. How small? Well, that’s up to you. Having said that, the smaller the pieces, the faster it will compost. Unlike recycling, you don’t have to worry about grease and cheese in the box. These factors will break-down over time.

If your area doesn’t allow you to place pizza boxes in the recycling bin, then composting is your best option for helping the environment. When the trash goes into the landfill, it will eventually start emitting methane.

Methane is a greenhouse gas, which can then contribute to the growing climate change problem. Another benefit of composting is that you can use it as a fertilizer. As it’s a natural fertilizer, it’s a lot better compared to the commercial-grade variety, which can be harsh to the environment.

Additionally, composting can help in significantly reducing volatile compounds in the air. This is according to the EPA. Keep in mind that volatile organic compounds are not only harmful to the environment but also to you. Slight exposure can cause throat irritation or nausea. Prolonged exposure can cause serious health issues like cancer.

Wrapping It All Up

In the old days, recycling pizza boxes was difficult. The reason for this is because of grease and cheese. Thus, the old advice is that you don’t put the pizza box in the recycling bin.

However, recycling methods and technologies have advanced in recent years that grease and cheese in pizza boxes are not a hindrance to the recycling process.

So the answer is – yes, you can put your pizza boxes in the recycling bin. However, contact your local services just to be sure.

link to How To Dispose Of Fire Pit Ash

If you have a fire pit at home, you'll remove the ash produced when burning the wood and throw it away from time to time. But that is until you know the incredible uses that you can give it, both for...

The lawn is one of the most crucial parts of any home. This is mainly because besides making the home beautiful it also provides a comfortable space to enjoy the pleasant outdoor atmosphere. Because...