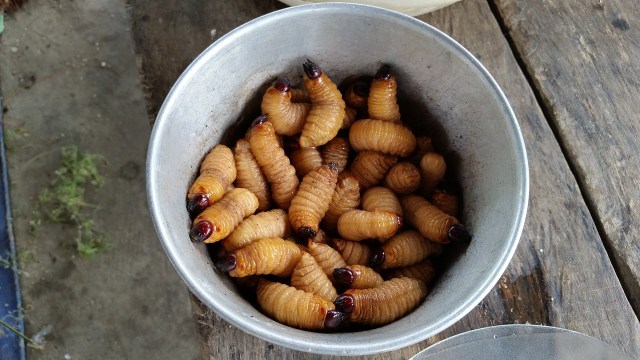 There’s nothing more annoying than maggots in your trash can or compost bin. During hot days, it almost seems like they multiply by the hour. In this article, I’ll tell you why you should or shouldn’t kill maggots, and how to do it.

Why is it important to kill maggots?

You should also be careful with maggots around your pets, especially if they’ve suffered from diarrhea during a warm summer day. Maggots can “attack” your pet and eat them from the inside out. This can go extremely fast. During the day, your pet can seem fine, and the next day…. Well, I’ve seen horrible situations. On rabbits but also on dogs. So if you see maggots on or near your pet, act fast!

Besides that warning, maggots turn into flies. So if you find them in your home, you better kill them before they evolve into flies and you can’t catch them as easily.

But there are also reasons you want to keep maggots alive. They are actually excellent for creating rich, nutritious compost. So if you find that your composting is going to slow, throw some maggots in there!

A quick, simple, and surefire way to instantly rid your home of these tiny insidious pests if is to use a gallon of boiling water. This instantly annihilates your maggot problem. Make sure to seal the lid of the container or trash bin they’re in.

If you do want to use this method and have a few chemicals lying around or in storage, add a cup of bleach and one and a half cups of hydrogen peroxide to your gallon of boiling water. Seal them in and watch them wither and die.

Though ammonia isn’t an instantaneous solution as boiling water is, it is one of the most effective ways to kill maggots. You may be looking up how to kill maggots using ammonia, but it is actually pretty simple.

Make sure you have a gallon worth of ammonia on hand to pour into an infestation. Seal the container or bin you want rid of maggots and let the concoction simmer. Within a few hours, your maggot infestation will be gone. Just clean and disinfect your trash bin afterward.

This method is another way to rid you of a maggot infestation if you don’t have any useful chemicals in your cupboard, or if you’d rather stay away from the chemicals for a more non-toxic and natural approach. To do this, use one part vinegar and three parts boiling water.

This deadly solution can kill live maggots. Thanks to the vinegar’s pungency, this blocks or gets rid of the numerous odors that are present that attracted the flies there in the first place, preventing them temporarily from laying even more eggs.

Bleach will kill maggots, but in order to keep yourself from suffocating with the maggots, dilute the bleach in water and pour it into the infestation. The water doesn’t necessarily need to be boiling, but if you feel the need to boil it for extra efficacy, you can go right on ahead. After pouring your solution into the infestation, cover the bin or secure its lid, again, to suffocate the maggots.

Just like with worms, maggots will have a similar reaction to salt. Just be sure to have a good amount of salt so you can sprinkle it on the infestation and cover all of them. For preventative measures, you can place salt on and around the rim of your garbage bin or whatever has been infested to keep more from coming in or escaping and spreading. Seal them in and let them burn the way worms do.

Can you drown maggots?

If you were searching around for how to kill maggots, drowning them, you’ll find, is the least effective way to kill them, unless the water you’re drowning them in is boiling hot, as it is more of the scalding temperature that affects them and less of just the water itself. Sure, the water can wash them away, but that still leaves them alive and squirming. You want them dead, so water alone is not effective at all.

Maggots and flies look for moisture, but maggots especially can even live underwater, too, so drowning them is not a viable way of killing them. Like with the first suggestion, use boiling water instead, or even just steam. Again, it’s the temperature that’ll kill off their tiny vulnerable slithering bodies. If you want to just get right on in there, why not just squish them? Stomp on them, crush them under your boot, drive over them with the tires of your car.

If you need to lure them out for the squishing, have some form of controlled rotting food such as a banana peel nearby that you can trap them into. Another proven method of luring them is placing a bowl of beer nearby. Studies show that flies like the glycerol that the yeasts make while fermenting. Flies even have receptors in their mouths that signal beer as good tasting to them. So if you want to lure the flies out for preventative measures, spare a can and entrap them.

So now you know how to kill maggots fast and instantly. And, why you want to kill them or keep them alive. They are a great helper with turning your food scraps into compost. But beware of maggots around your pets! Good luck and go get them!

Hi, I'm Gina, mother of two sons and married to Wayne. I love working in- and around the house and my biggest hobbies are gardening and projects around the house. So I'll share a lot of tips and tricks with you around those topics.