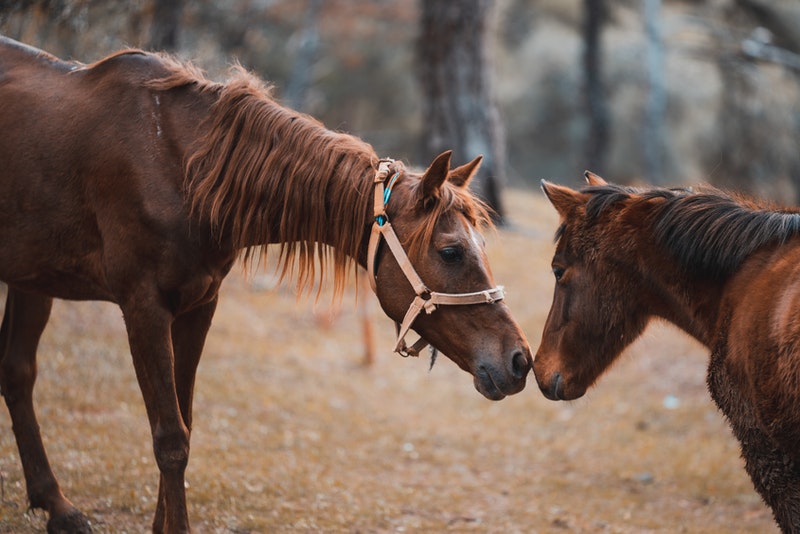 While it is easy to get into the habit of dumping horse manure into one large pile, the manure is not composting properly and could take over a year to become useable soil.

Composting takes time, effort, oxygen, and moisture to produce soil that is rich in nutrients. By making composting a part of the daily routine, the decaying process can be accelerated, producing healthy rich soil in as little as 4 to 6 weeks during the summer months.

What Do I Need To Compost Horse Manure?

Most of what you need to start a compost pile is already on hand or in the air. Oxygen causes decomposition so when you turn your compost pile over anywhere from three times a week to once a month, you are exposing more surfaces of the manure to oxygen and speeding up the composting process.

Turning the compost pile can be done with a pitchfork, shovel, tractor, or a front-end loader. As the manure is turned, break up the larger chunks with a shovel or your hands.

Moisture is another essential item needed to speed up the decomposition of horse manure. Dried up compost can be watered until the material is damp, but not soggy. To keep the pile moist, place a tarp over it.

Raked leaves and grass clippings add carbon and nitrogen to the compost pile. This helps the bacteria and fungi break down the manure. Weeds and straw or used bedding can also be added to the manure heap for the same purpose.

Where Should I Put The Compost Pile?

Finding a good spot to start the compost pile is essential to your success. Begin with a flat area of ground. It should be away from any buildings, ponds, wells, and streams. Keep it away from grazing horses and the horse stall.

What Is Bin Composting?

Bin composting is just another way to build a compost pile and create a system of aerating the manure until it has turned into soil. This method of composting works best for people who like to have a system that can fit in neatly with their schedule of chores.

A three-bin composting system creates great soil in a neatly organized space. The three side-by-side bins are made of junk lumber or pallets. The first bin is for fresh manure and it is where all the manure from daily cleanings go. When the first bin is full, the manure is transferred to the second bin and, by doing this, is aerated.

If you find that the three-bin system is not producing fully composted manure by the time you need to empty the third bin, you can expand the row of bins into a four-bin or six-bin system.

Keep the bins covered with a tarp to maintain moisture and only add a small amount of water to the piles if they begin to dry out. (source)

Can Compost Piles Be Dangerous?

Yes, compost piles can be dangerous, especially when they are not taken care of.

The piles are combustible. Do not smoke near a compost pile and avoid burning anything near a decomposing pile.

If you smell something like alcohol coming from the pile, do not water it down. Instead, aerate it immediately to release the gases.

How Do I Monitor The Compost Temperature?

Monitoring the temperature of the compost pile helps you know if the manure is decomposing properly.

Compost thermometers, made especially for checking the temperature of a compost heap, are available online and in local garden stores. (source)

How Can I Tell When The Composting Is Done?

After all the work has been done and enough time has passed, a well-composted pile will be half its original size. The manure will look like rich soil and it will no longer smell like horse manure. It will crumble between your fingers as dirt should.

The temperature in the pile will also have decreased to around 100 F because the process of decomposition has ceased.

Now that the fresh soil has been made, it should be cured for another 4 weeks before use. Keep it moist and covered, but there is no longer any need to turn it over.

How To Use Composted Manure?

When the worms have moved in and the compost pile no longer smells like horse poop, it is time to make use of the black gold you made. You can use it in your garden, in the pasture, or on your lawn. Simply spread it in a 1/4 to 1/2 inch layer using a shovel or manure spreader. (source)

If you have more compost than you can use, you can sell it to local nurseries and tree farms. Organic farmers and local landscapers might also be interested in rich soil.

Is Composting Worth The Effort?

The answer to this depends on the amount of time and effort you are willing to put into the project. For some people, composting their horse’s manure is the best option for them and their garden. People who have limited time and space would probably prefer having the manure hauled away for someone else to compost.

Whatever your decision, you could always try composting a small pile for a season. The dirt you make can be tested on those tomatoes you have been meaning to grow.

Hi, I'm Gina, mother of two sons and married to Wayne. I love working in- and around the house and my biggest hobbies are gardening and projects around the house. So I'll share a lot of tips and tricks with you around those topics.