How to Aerate Your Lawn

Do you really need to aerate your lawn? In my opinion, everyone wants their lawn to be beautiful and healthy, the showcase of the neighborhood. Fertilizers and watering alone will not always produce the lawn you dream of. Depending on the age of the lawn, the soil, and environment or growing conditions of the lawn introducing lawn aeration into your yard care routine can result in a beautiful greener lawn without too much work.

Aerating a lawn is basically opening up the soil to allow the grassroots to breed by using one of three methods when grass grown in heavy clay soil has deeper thatch buildup or has a lot of heavy foot traffic, such as on a playfield where the soil becomes compacted the roots of the grass cannot receive enough vital oxygen or water. Although seldom will a diminished supply of oxygen to grassroots cause the lawn to die, the lawn will become lackluster and sickly looking over time if oxygen is denied to the roots.

As an Amazon Associate, I earn from qualifying purchases.

Each has its benefits and drawbacks depending on the type of law on the use of the lawn in the desired outcome.

An easy way to determine if the lawn needs aeration is to carefully dig out a square foot of lawn that is dug six inches down if the roots are only in the first two or three inches of the six inches and tangled and balled up, aeration is most definitely needed. But if the roots reach are not too close to the bottom of the six inches and you see that the roots to have room to spread and there is at least half-inch of thatch buildup on top of the soil, hand or power raking may be the best solution.

Tine or spike aeration, as the name suggests is simply making deep cuts into the lawn’s soil with spikes using special shoes with spikes underneath. There are also power spike aerator machines available like these tow-behind lawn aeration machines.

Lawn spike aerator attachments for your shoes are less expensive to 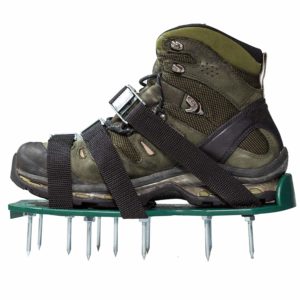 implement than plug aerating, but the benefits of spike aerating along or not as long-lasting and should be repeated more frequently.

Unlike plug aeration, spike aerating can be done at any time during the year even multiple times in one year. With spike aerating the visual effects are minimal compared to a lawn that has been plugged aerated and the turf heals far quicker with spike aeration.

Because of the deep cutting sometimes up to a foot or more spike aerating close to underground watering systems our tree and shrub roots must be avoided to prevent any damage.

Plug aerating also referred to as core aerating is done with a power machine that removes a three to a four-inch plug of grass and soil every three or four inches throughout the lawn. It is the preferred and most effective method of aerating your lawn because instead of simply making cuts in the lawn as spike aeration does, it extracts the core or plugs from the soil which then allows a direct path for air, water, and fertilizer to reach the grassroots. This access to the grassroots will enable a lawn to grow fuller and healthier.

The visual effect of the lawn that has been plaguing aerated is not as appealing as a spike- aerated lawn since the plugs that have been extracted are generally left on the surface of the lawn. This process will naturally break down into smaller segments and integrate back into the lawn.

When to aerate your lawn?

Most homeowners need only to plug aerate the lawn once a year either in the spring after the last freeze or fall before the freeze. If the lawn is not terribly compacted, core aeration can be done every two or three years for optimum benefit. Spike aeration may be done at any time during this season and may be applied multiple times during a single season because of the ability of the turf to heal quickly from the cuts and the shorter duration of the benefits of spike aeration.

For compacted lawns, where vehicles drive over, especially where sports events are held or construction occurred that had heavy equipment driving over the area, plug aeration is recommended and may be needed twice or three times a year. This should be done only in extreme cases and probably only on the advice of the lawn care professional