All the important facts on recycling in one article

With the rise of industrialization and large-scale production in the past few centuries, people around the world are consuming more than ever before. As a result, world-wide waste is also at an all-time high, posing unprecedented risks to the health of the planet, its ecosystems, and the lives of future generations. From pollution to climate change, to deforestation and the depletion of resources, the future depends on the actions we take now to fix the environmental problems facing the world and its future.

We’ve all heard the mantra: reduce, reuse, recycle. Undoubtedly, it presents an easily memorable, practical solution for environmentally-conscious individuals to think about and use in their daily lives. In this article, we hope to present a variety of facts surrounding recycling with the intention of providing accurate educational information and creating motivation for our readers to recycle more.

To start, we’ve included some facts about General Waste Production in the United States.

From these statistics, it’s clear that Americans generate quite an enormous amount of trash without adequate regard to where it ends up. As an alternative, the practice of recycling cuts down on the need for raw materials that contribute to growing environmental problems like pollution and climate change.

Now, we’re going to break it down into five specific types of materials that are commonly recycled by the average consumer: plastic, aluminum, glass, food, paper, and a bonus: styrofoam. So when you go make the decision between throwing away or recycling a particular item, you can be more conscious of the material itself and where it’s going. Finally, we will provide a few brief facts on the positive benefits of recycling on the overall US economy.

Without further ado, let’s get started.

While recycling plastic is a better option for the environment than throwing it away, as a material, it is less efficient for recycling than some other materials like aluminum. So, here’s our tip on how to best reduce plastic waste: 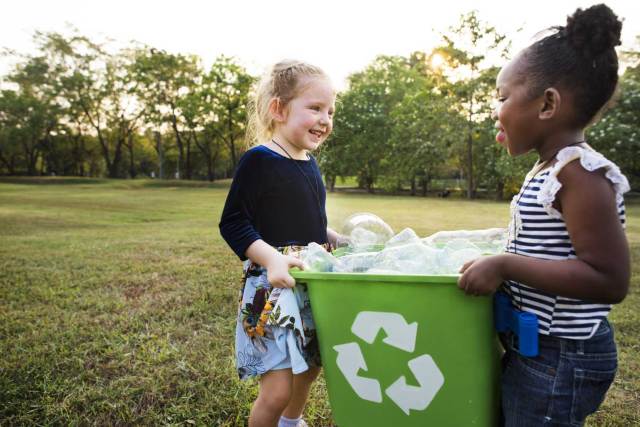 Our tip on recycling glass: Similar to recycling aluminum, we recommend making a habit of bringing your glass waste with you to the grocery store, especially because of the high recycling efficiency and the small profit you’ll get back.

We’ve included Styrofoam because we think that it’s an important material to consider when making consumption choices. But in fact, styrofoam is not recyclable! Our recommendation: not purchasing products containing styrofoam in the first place. If this is a topic you are interested in knowing more about, consider checking out the “No More Styrofoam Project,” by clicking this link.

Now that we’ve seen a variety of facts about different kinds of recyclable and non-recyclable materials, here are just a few facts about how recycling, in general, can be beneficial for the economy

Facts on Recycling and the Economy

2. Recycling creates $200 billion annually in the US.

As we have seen from the facts in this article, from preserving the health of the environment to saving money in your wallet, to supporting the overall economy, recycling presents a good option for the average person. We hope this article gave you some new information on recycling and, importantly, some motivation to find ways to recycle in your own daily life.