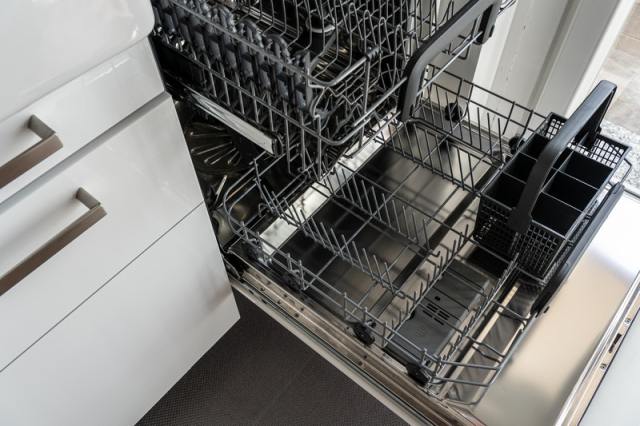 How and why are the dishwasher and the garbage disposal connected?

The wastewater from the dishwasher drains into the kitchen drainage system – the same system, or pipe, that the water from the sink drains into. Because of that, it’s important to have a mechanism in place, which prevents any back-flow of wastewater from the sink back into the dishwasher. There are several ways of doing this, but it is typically accomplished by using a loop of tubing in the form of an upside-down “U”, with the top of the loop elevated higher than the bottom of the sink.

This elevated tubing is also called an air-gap, because when the dishwasher isn’t pumping out water, the top of the pipe fills with air as the water level drops. The elevation of the tubing requires pressure to overcome. The gravity of the wastewater in the sink is not enough to overcome that pressure, because of the height difference. The dishwasher pump, however, can easily overcome it, which creates a nice one-way valve. In the absence of this elevated tube valve, the contents of the sink may get pushed back into the dishwasher, clogging its pump.

Why does the dishwasher drain into the garbage disposal?

You can probably already see why the output of the dishwasher connects to the garbage disposal. Since they both share a kitchen, and both use the same drainage system, it’s very practical to connect the drain output of the dishwasher directly to the garbage disposal. By doing this, creating the U-shaped air-gap tubing also becomes easy – by installing the dishwasher right next to the sink, and connecting them with a tube that is bent upwards, the air-gap is automatically created.

Can a dishwasher work without a garbage disposal?

Installing a dishwasher if you don’t have a garbage disposal is no problem. The exact same arrangement is used – the drain output of the dishwasher simply gets connected to the sink drain, before the trap (the larger section at the bottom of the drain, or a U-shaped tube). This is usually done by using a tailpiece, which is cheap and looks like a T-shaped connector.

Can I run my dishwasher if my garbage disposal is broken or malfunctions?

In almost all cases, it’s the blades or the motor assembly of the garbage disposal that malfunction or break. If that’s the case, your dishwasher will not be affected in any way. As we already explained, the only way a dishwasher uses the garbage disposal is as a connector and ‘entry-point’ to the kitchen drainage system. However, there are a few unlikely exceptions.

But what if the malfunction of the garbage disposal has led to a clog in your sinks’ drain?

If the drain of your sink is clogged, you may run into problems. If you try to run the dishwasher when the drain is blocked, the pump of the dishwasher will push dirty water up into the sink, potentially causing a mess. This is an unlikely scenario, but it can happen if you’ve just dumped a lot of food waste into the garbage disposal and it has broken right in the middle of ‘devouring’ the contents. If that’s the case and the drain of your sink is now severely clogged, you must unclog it before running the dishwasher.

There are several ways to do this and it all depends on the type of food waste that has caused the clog. Larger pieces, like banana peels, need to be carefully taken out of the drain by using a stick or pliers. For safety, always unplug the garbage disposal before attempting such procedures. If the clog is caused by smaller food pieces, a simple plunger can do the job.

link to Should You Water Your Compost?

It is critical to keep the right amount of moisture in your compost as too little or too much moisture can affect the process. The process of composting can seem simple but you have to understand...