Are diaper pails necessary and worth it? In this article, we give you all the pros, cons, tips and answer the questions you are looking for.

A diaper pail is a trash can where you throw your baby’s diapers. It is specially made to withhold and lock in any odors from the diapers. It, therefore, ensures your house does not stink from the smell of used diapers. The trash can has mechanisms to absorb the odors and lock it in.

As an Amazon Associate, I earn from qualifying purchases.

Is a Diaper Pail Necessary?

It is not absolutely necessary that you have a diaper pail in your house. You can simply use the other trash can you use for other refuse. But truth be told, you will have a hard time. You will use your mouth to breathe rather than your nose because of the foul smell coming from the same.

In case you need to completely do away with the odor from used diapers, then you have two simple options. You could decide to throw the used diapers in the outside trash can or just purchase a diaper pail. These containers are very effective in reducing odors because they are specially made for that specific purpose.

The best part about these cans is that they are durable and can be used as regular cans for trash when the days for diaper are over. These could be a good answer to the question Are diaper pails worth it? 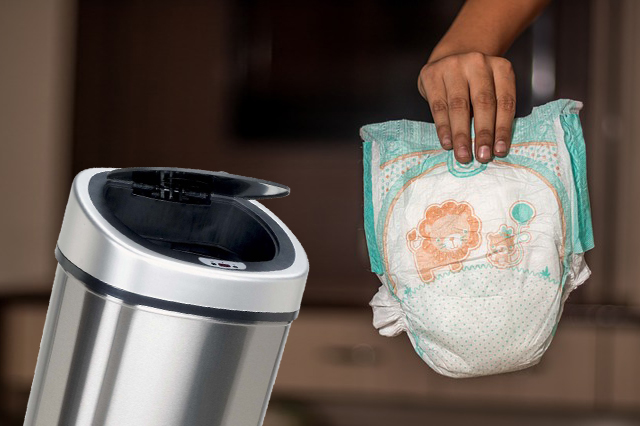 The following are some of the benefits of having a diaper pail in your home.

1.  Availability of the rubber seals. These are the mechanisms that enable it to lock the odor inside. The rubber ensures that no air or smell can get out of the trash can thereby your house will not be filled with the smell from the used diapers.

2.  It is easy and safe to clean. The trash can is very simple and not complicated in any manner. It is very easy to load it and empty it too. Again when it comes to cleaning it is not quite a big deal and dries very fast since it is plastic.

3.  Some diaper pails do have a child-proof system that locks out children from opening the can. Children can be cheeky and if left alone they might want to access the trash can to sample what is in there.

4.  They have a foot pedal that makes it convenient for opening the pail. You do not have to keep touching the lid you will just step on the pedal and the lid pops open.

5.  Another advantage is that they can be placed inside the baby’s room or your home. This is because it does hold in the odor so there is no point in leaving it outside for security purposes.

Here are the demerits of these trash cans.

1.  Some of these trash cans have a limited capacity and therefore you will be forced to empty it from time to time.

2.  Some of the diaper pails do not have a warranty. Therefore if something goes wrong then you will have to incur the repair expenses.

3.  In as much as they trap odor inside, if they overstay for a very long time then you can be sure your house will start to smell. They will no longer have the ability to trap in the odor anymore.

In case you do not feel like getting yourself a diaper pail then there are some other alternatives that you could decide to go for. A research was conducted on what most mums use in the place of diaper pails and these are the alternatives they stated.

Pick up bags for puppy poop. So all the diapers for pees will be thrown in the garbage while the poops will be put in puppy bags. You can then place them in the trash can outside or take them to the garbage bin on a daily basis.

Waste bags also look like dog poop bags but they are scented. You could put the used diapers in these bags and of course, there will be no much smell coming from there. This is because the scent from the bags will neutralize the odor from the diaper. Read our article “Top 5: Best Scented Dog Poop Bags” to know more about these bags.

Some people use regular trash cans. But these do have a lid for hygiene practices. Only the pee diapers are however placed there as the trash can lock in the odor from in the trash can. The poop diapers are placed somewhere else or sometimes taken to the garbage bin outside.

What Should a Good Diaper Pail Have?

An ideal diaper pail should be hands-free. This means that you should not be touching it all the time when opening or closing the pail. This is of course due to hygiene purposes. Some poop my stick to the lid when you are throwing the diaper in there or the sides. So if your hands are involved in touching it most of the time then it is a hazard.

There are so many germs involved. A perfect diaper pail should also be able to hold in the odor from the diapers. Some of the diaper pails are even scented to try to neutralize the odor. It should be having like a rubber that holds firm and is air-tight such that no odor can leak from the pail.

Diaper pails that come with a warranty are also very vital. This is because if it develops any fault on its own then you can always get another one. You may purchase one and discover that the odor is leaking after you put the diapers. So in such a case if it had a warranty then you are okay as the matter will be looked in to.

Are diaper pails worth it? Well, it depends on a number of things as it is explained in the next section.

Are Diaper Pails Worth It?

This is a question that most people have on their minds. Categorically no one needs one that bad. However, it can be quite useful for the case of a large house whereby the nearest trash can to your nursery is a bit far. You do not want to criss-cross the entire building with diapers in your hands thereby sending the odor in the entire room.
They are recommended if you feel that you are not on a tight budget because they are very, very convenient. Especially the hands-free ones. If you’re interested you can read our blog post “Top 8: Best Hands Free Diaper Pails“. You can decide to do away with the costs of buying one. You simply wrap the diapers in plastic bags and toast them in your regular can. Or you can look for those dog poop bags since they are cheaper and scented. They will also accomplish the task well.

This Tommee Tippee Simple Diaper Pail is the space-saving, stylish and simple way of keeping your baby’s nursery neat and odor-free. Babies do tend to make quite a mess for such little people. Odors are contained by the use of multilayer film and a smart seal lid. This diaper pail is ideal for the disposal of diapers, cotton wool, wipes, and all other trash. Disposing of your diaper into an anti-bacterial odor-blocking film is very easy. All you have to do is lift the lid and push the diaper through the smart lid. This pail is small enough to be stored in a nursery cupboard and can hold up to 18 diapers.

All those smelly odors are contained and blocked from escaping by the smart lid and the multilayer film that also contains an anti-bacterial ingredient that kills germs and offers protection when the pail is full, simply cut the film by making use of the built-in cutter and tie a knot in the film to make a new bag.

Can I use diaper pails for other trash as well?

What size do I need?

How do I get rid of the smell coming out of the pail?

You can also put a coffee filter on the bottom of the pail or some cloves.

How do I disinfect my diaper pail?

You can use a disinfectant spray like Lysol, or use a more friendly way by using hot water mixed with 20-40 drops of tea tree oil.